As an institution of higher education and in keeping with the mission, vision, and goals of the college, the Good Samaritan College establishes honors and recognition consistent with academia’s historical and traditional methods that is recognizable by all institutions of higher education.

Academic costumes are as old as the universities themselves, recalling a time when all students in centers of higher learning were members of the clergy and wore garments that were considered proper by the Church.

American universities, unlike those of England and Europe, have adopted a standard code of academic costume. The custom of wearing a cap comes from the Roman usage of conferring upon slaves the right to wear a cap when they were granted their freedom. The Oxford-type cap or mortarboard is always black and may be made of any material except velvet, which is reserved for doctors. The tassel worn with the cap has three variations: black for any degree; the color of the faculty in which the degree was granted; or made of gold metallic thread, reserved for doctors and governing officials of institutions.

Each person who receives a degree wears the gown appropriate to the degree granted. The bachelor’s gown is closed at the throat and has long pointed sleeves; the master’s gown has oblong sleeves, open at the wrist, tapering at the back in a square cut, which ends in an arc cut away. The doctor’s gown is an elaborate one, marked by velvet panels down the front and around the neck as well as by three bars of the same material on the bell-shaped sleeves. It is cut much fuller than the other gowns, and unlike them, may be ornamented in color. Both the paneling and sleeve bars may show the faculty in which the degree was awarded.

The hood alone clearly shows the level of the degree, the faculty in which it was given, and the institution that awarded it. The level of the degree is shown by the size of the hood, the width of the velvet trimming, and in the case of the doctor, by the shape. The bachelor’s, master’s, and doctor’s hoods are three feet, three and one-half feet, and four feet long respectively. The velvet trimming in the same order is two, three and five inches, extending around the hood on the exposed edge. For each faculty, there is a corresponding color, so a glance at the trimming is all that is needed to identify the faculty. The institution, which awarded the degree, is indicated by the colored lining. Examples include but are not limited to:

Members of the governing body of a college or university, whatever their degrees may be, are entitled to wear the gown warranted by their degree or a doctor’s gown. The doctor’s gown is trimmed in black velvet or the color representative of their degree, but their hoods may be those degrees actually held by the wearer or those prescribed for them by the institution. The president’s gown is trimmed with a fourth stripe on the sleeve.

An award conferred by a college or university signifying that the recipient has satisfactorily completed a course of study. These degrees are authorized and approved by state and national authorities recognized by the U.S. Department of Education. Good Samaritan College awards:

An honorary degree or a degree honoris causa (hɒˈnɔːrɪs ˈkaʊzɑ Latin: “for the sake of the honor”) is an academic degree for which a college/university (or other degree-awarding institution) has waived the usual requirements, such as matriculation, residence, study, and the passing of examinations. The degree is typically a doctorate or, less commonly, a master’s degree, and may be awarded to someone who has no prior connection with the academic institution.

Usually, the degree is conferred as a way of honoring a distinguished visitor’s contributions to a specific field, or to society in general or to someone making a significant contribution to the success of the institution. The college/university often derives benefits by association with the person in question. Examples include but are not limited to:

Honorary degrees are usually awarded at regular graduation ceremonies, at which the recipients are often invited to make a speech of acceptance before the assembled faculty and graduates – an event which often forms the highlight of the ceremony. Generally, college/universities nominate individuals by resolution for honorary degrees; these nominees may go through a committee process before receiving approval of the President. Those who are nominated are generally not told until a formal approval and invitation are made to the recipient.

Undergraduate students in bachelor degree programs who have achieved a college cumulative average in one of the three categories below will receive “Latin Honors”:

Undergraduate students in associate degree programs who have achieved a college cumulative average in the category below will receive “Honors”:

Students who anticipate receiving Honors are entitled to wear gold honor cords along with their other regalia.

Greater Cincinnati Consortium of Colleges and Universities (GC3) award for Outstanding Teacher of the Year.

Our students practice their medical skills in our nationally-recognized Simulation and Skills Lab.

Study under faculty with doctorate degrees in their field. 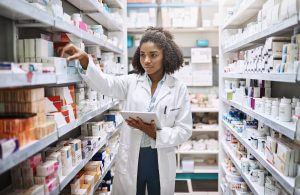 Advance your career in as little as three semesters with a Pharmacy Technician Certificate. Starting Summer 2021, the new short-term technical certificate prepares students to work as a pharmacy technician in a variety of settings. 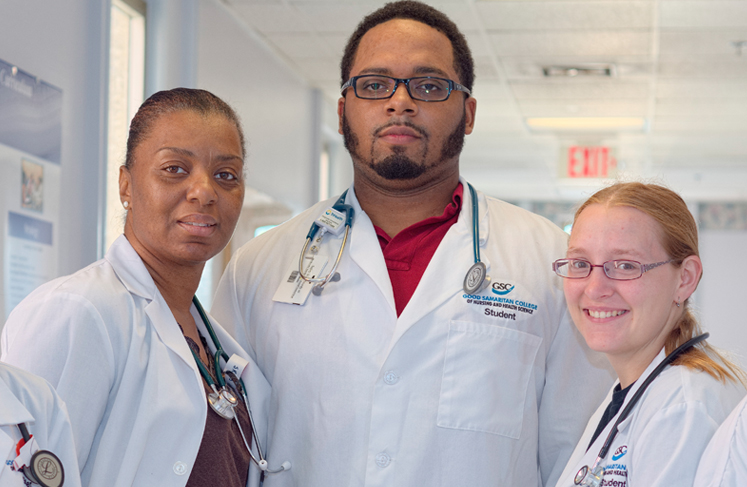 RN-BSN information sessions are a great way to learn about career advancement through Good Samaritan College’s RN to BSN Completion Program. Learn more about the program and admissions process.

Your passion is health care, and now GSC offers the same great quality in a flexible delivery format. Learn more about our fully online BSN as well as other online options. 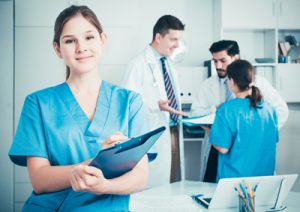